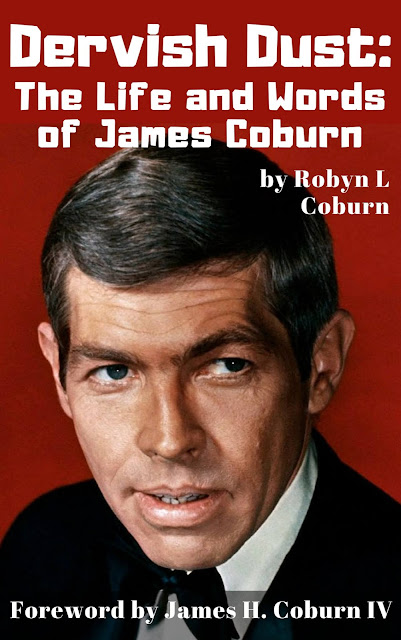 This is the biography, authorized by his Estate, of “cool cat”, actor James Coburn – his career, romances, & spirituality. Thoroughly researched, with unparalleled access to old friends and family, including his son, James H. Coburn IV, and daughter, Lisa Coburn, the book’s foundation is his own words in the form of letters, interviews, and most especially his previously unpublished memoirs that he recorded in the months before his passing in 2002. There is no other Coburn biography yet in existence.

James Coburn was an individualist – charismatic, humorous, opinionated, loving, pragmatic and stoic, but above all a deeply thoughtful actor. The arc of his almost 50-year career was early success, a long ride at the top, a crash and struggle through his later life, then a final Renaissance, both personally and professionally, in his last decade. All the while he strove to attain not just mastery of his craft, his art form, but also spiritual enlightenment, through explorations into alternative philosophies. He was "New Age" before it had a name.
His professional life was highlighted by brilliant friendships, and an extraordinary level of respect and affection from his colleagues and associates. His personal life embodied not one, but two love stories for the ages, marked by romance, sensuality, poetry and devotion. And then there were some affairs along the way.
He was a passionate aficionado of classical music, jazz, and luxury sports cars. His work spanned the gamut of beloved classics (The Magnificent Seven, The Great Escape, Charade, Our Man Flint, The Twilight Zone -"The Old Man in the Cave"), intellectually challenging pieces (The President's Analyst, The Last of Sheila), and frankly mediocre projects, where he was the best thing in them. Interestingly, his films helped lead the dismantling of the notorious Production Code and usher in the ratings system that we know today. Few people know of his army career, or his life in theater in New York. He took all his work seriously, and gave every role his full attention, while being pro-active as a producer and instigator of new work.
His motto was “Go Bravely On” which he embodied during the period when he suffered from the same debilitating disease that almost destroyed his own father. It was a motto he took with him professionally every time he arrived on the set in the last few years of his life, a time when he did some of his best work, garnering the admiration of a whole new generation of colleagues and fans.