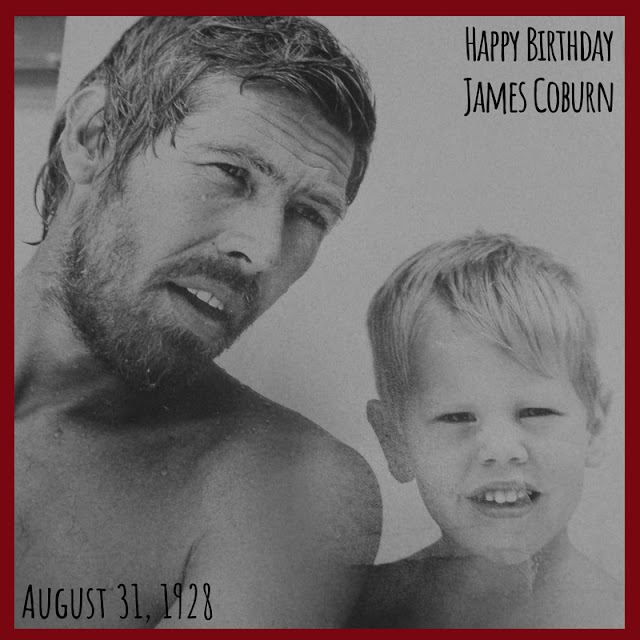 This is James Coburn, pictured with my husband as a boy.

This photo would have been after Jim had become successful as a co-star in films like Charade (1963) and The Americanization of Emily (1964). It looks like it might have been from around the time of the shoot of A High Wind in Jamaica (1965), in which Jim sported a beard and mustache.

Here is a brief excerpt from the forthcoming biography:


The Coburn family had recently returned from what must have felt like a vacation, shooting A High Wind in Jamaica (1965) on location in Jamaica for two months, with a month in London for the interiors. Coburn had been to London for tests and rehearsals, then flew into Kingston on June 25 to be joined by Beverly and the kids about a week later. They then spent July and August of 1964 enjoying the tropical climate while he portrayed Zac, the cranky, wily second in command to Anthony Quinn’s Captain Chavez.
At the time, the shooting location, Rio Bueno, and the nearby beach villages had only recently been discovered by tourists. The area could certainly be described as an unspoiled tropical paradise—lush greenery, turquoise waters, pristine white beaches, and a nearly uninterrupted skyline in every direction. Most of the structures dated from Colonial times. It was perfect for shooting a Victorian-era period film.
The movie was based on a 1929 book, The Innocent Voyage by Richard Hughes, about a colonist’s wild young children who, on their way to school in England, accidentally stow away on a pirate ship. It is often compared as a kind of bookend to William Golding’s 1954 The Lord of the Flies. Both deal with themes of children as naturally savage beings who need the firm control and direction of adults to become or remain civilized. According to a 1986 documentary produced by Scottish Television about the director, Alexander Mackendrick was enthralled by the book, considering the “dark” novel a work of genius.128 Some years earlier he declared that he “desperately wanted to make this movie.” After finishing the picture, he was less enthusiastic about the result, having learned a valuable lesson: “Second-rate books, you can make films of, but true masterpieces never should be transferred to the screen.” The story had been considerably lightened and sanitized in an attempt to skew it toward a family film.
Coburn was interviewed for the same documentary about his experience working with Mackendrick. “It was wonderful to watch him. He was producing the thing, helped build the sets, moving. He was doing more than anybody could ask because he wanted this thing to be really good. And he was very responsible to it. He’d dreamed about it, he told me, for twenty years.”
He went on to speak admiringly of Mackendrick’s ability with the child actors. The director had often worked with children and “learned more about working with adult actors from working with children.” He maintained an amazing level of patience. “He was superb with them. He never raised his voice to them. He would turn around, after this little girl who kept looking the same all the time, and [make a face then turn back smiling]. ‘Yes, darling. Just right.’ He would go after her and just… He knew how to do that. I don’t know how to do that. I would lose my patience with the children. But he wouldn’t lose his patience with anybody.”
Working with Mackendrick reinforced Coburn’s profound commitment to his art form. “I think he taught me the value of film, of the honor of making film, of dealing with the magical instrument, the realization of certain visions, the solidifying of dreams—that responsibility… Ah… I don’t think there’s anything anybody can do that’s more important than make films.”
A little hyperbole, perhaps. At the time of the documentary, 1986, Coburn seemed completely sincere in his beliefs about the cultural value of movies as a force for social change. It was an idea that had long percolated around in his thinking, and one that Beverly shared. She had written about it back in 1963—“Movies are the greatest propaganda we have, also the greatest setters of style and attitude, and I feel we should use the responsibility positively.”129 Back then, as a couple they were discussing ideas that would shortly influence the next stage of his career. But in the meantime, A High Wind in Jamaica was an opportunity for him to really show his charisma on screen.
128 “Mackendrick: The Man Who Walked Away 1/6,” YouTube video, 9:58, from a 1986 Scottish Television documentary, posted by robinofgray, June 3, 2010, https://www.youtube.com/watch?v=qfeLZYVIGsY.
129 Beverly Coburn to James Logan, January 17, 1963, private papers.

I'm bringing them to Free to Be Unschooling Conference, where I am presenting this year.

I'll be speaking on Creativity, Misconceptions about Unschooling, and Job Hunting skills (hence the books), as well as hosting a crafting funshop about stamped clay pendants, and joining my daughter on a Q&A panel.

Here's a documentary about one of James Coburn's great films.


Posted by Robyn Coburn Writer at 5:42 PM No comments:

My books now available in Paperback


Posted by Robyn Coburn Writer at 6:00 AM No comments:

Join my creativity group to enter this giveaway


Posted by Robyn Coburn Writer at 6:07 PM No comments:

Posted by Robyn Coburn Writer at 8:11 PM No comments:

Posted by Robyn Coburn Writer at 8:09 PM No comments: