Back to the Writing Desk...

Unfortunately, as sometimes happens, we were not able to come to an agreement that everyone was happy with, so I'm back to looking for representation for Dervish Dust. However, I am not discouraged.

If anything I am excited, because the agent is still interested in seeing my fiction work when the first book is finished. That being the case, I'm going to now share some more about it.

When Jenna Hanson moves to small town Windchime Lake, she hopes that she will finally be able to settle down for more than one school year, put down roots, and make some real friends. Her mom is excited to start a new business, and her dad hopes his new job as a biologist attached to the pulp-and-paper mill will be his redemption from a past big mistake in his career.

But almost immediately Jenna realizes there is something strange about the Lake that gives the village its name, and making new friends is not as simple as she hoped.

This is the first in a Middle Grade fantasy series.

I'm also embarking on a quest to improve my writing in general and increase my content output, so that I can submit short pieces both fiction and non, to the many markets available. My goal is to make a good living from my writing. It's that simple. So you will find some short bits and bobs on this site for a while - what might be called writing exercises.
Posted by Robyn Coburn Writer at 1:19 PM No comments: 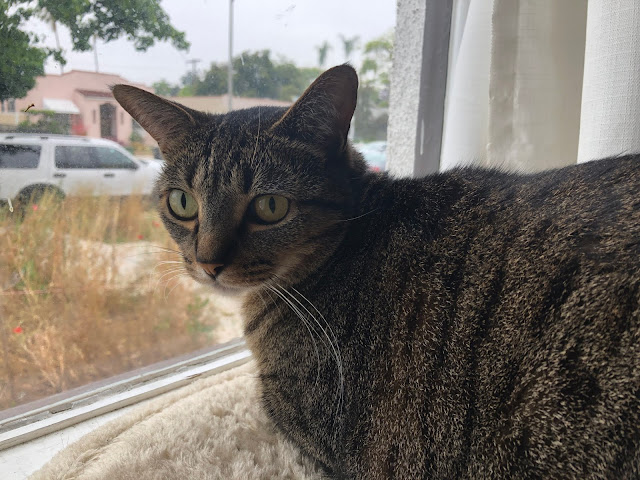 I’ve not always been the best cat mom.

In fact my last cat was an indoor/outdoor cat that freely came and went, out the small window while I was out at work. He was quite the scammer, making pretty much everyone along the street believe that they were his people. I only found out when I was ready to move, and was looking for him to put in a carrier and come with me.

I met up with him coming out one of my neighbor’s houses. He had the grace to look a little guilty or at least conscious that he had been caught. The lady of that house was so stricken, so heartbroken that he might be leaving her, that I happily let her keep him.

It took 30 years for me to get another cat. This one is our joy. We keep her indoors, since we know that indoor cats live longer. If the conversation in the house ever flags, all we need to do is tell each other some cute thing that Virgo did today, like clack in throat at those pesky crows that dance on the street, and taunt her in her window. We all like to watch her sleep or roll over.

She gets the most high quality food, and I play with her. She curls up on a cat tree next to my desk as I write, then follows me to whatever room I am working in. She mews and likes it when I brush her. She yowls in hallway when she wants to play - I throw balls for her. When I’m at home alone, she acts like she’s my cat.

Oh no. She’s my husband’s cat, all the way. I feed her, but she runs to him.  She sleeps at my feet, but cuddles up at his head. Her name’s Virgo, but he calls her “Cat”, so she answers to that when he calls. She presents her belly to him to be rubbed. And for a standoffish rescue cat - she has finally started sitting on laps after three years - she shows him the most affection. She talks to him at length, and seems to answer his questions. It’s lovely.

There’s no gratitude in a cat. But I have enough to cover her little share. I forgive her scratching up the sofa - that she only does when she wants attention. She likes to visit with our visitors. She sometimes calls out when she thinks she’s alone. She likes to hide in odd places and make us worry that she got out, but she never tries to go out an open door - just looks with mild curiosity. Stays.

Posted by Robyn Coburn Writer at 1:13 PM No comments:


Hi folks,
I was planning to write a post about staying positive while collecting "no's". I've been sending out query letters to agents who rep biography since last November, and I've collected a bunch of them.

They have been in the form of jaunty form-letter rejections, or brief words, although a couple have been a bit more personal and encouraging. I got one referral and then the no from that was very kind, probably more in deference to the referrer than me. I only had one really brusque no, and their brief feedback as to why feels perfectly logical and useful.

I've even had a couple of requests for the full proposal (more on that later), and about half the people sent no reply at all, which after a certain time (usually specified on their websites) is a tacit no.

I didn't feel bad. I researched each agent thoroughly - read their sites, determined whether they were a good fit for the book, were open to new authors or any submissions at this time, customized my query letter. I sent out a few a day in what was two batches over a couple of weeks each time, then settled down to wait. I was collecting those no's, because every no was one step towards the ultimate yes.

I guess I hadn't been at it very long to become actually discouraged.

Then a kind of miracle happened. A friend of mine who is a writer referred me to his agent. She was certainly not on my radar or in any of the guide books. Nor is she a bio specialist, but does have some experience with the genre, and knows everyone. I talked to her, and she requested my proposal, and read it the next day, and came back to me with an offer of representation - which is unheard of. That is super fast. I was lucky that I caught her in a few free days - she actually read my sample chapters while she was on a family trip.

She's lucky - she can read in a moving vehicle. The main thing is she said she believes she can sell it.

So as things stand, there are some contract details being addressed with the James and Paula Coburn Foundation, and I may soon be able to say that I actually have an agent for Dervish Dust. To follow more on this particular journey, please Like my Facebook page for the book.

But the great thing, for which I will be forever grateful, was that she took time out of her vacation to give me some valuable and awesome notes about the proposal (OMG too long) and sample chapters (just some tweaks!). It was so exciting to have real feedback from someone who knows what they are doing about this proposal.

I hope she will also be interested, in the fullness of time, in my upcoming fantasy YA series, the Mermaid Lake books. The first one, Mermaid Summer, is in rewrite stage - the tough part.

Posted by Robyn Coburn Writer at 1:51 PM No comments: